Both volumes "Great economic thinkers" are available as E-Books

The commencement of the General Data Protection Regulation (GDPR) obliges the chair to obtain an approval for the use of personal information on its web page. Unfortunately we do not have the contact information of every person. If you wish that your information (e.g. your name and the topic of your thesis) is removed from our web page, simply contact us by mail: a.biermann[at]wiwi.uni-frankfurt[dot]de

The prize had first been awared in 2004 by the fwwg. 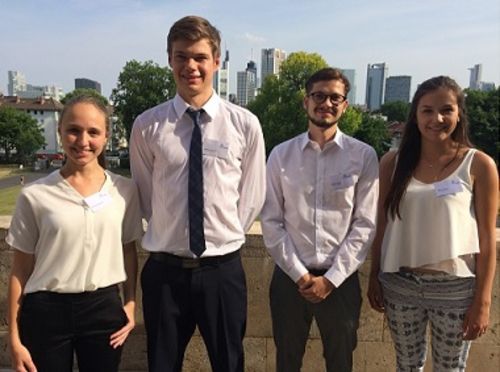 Guest Lecture by Prof. Michel De Vroey: "From Keynes to Lucas - The Development of Macroeconomics"

He has recently published his book with Cambridge University Press. 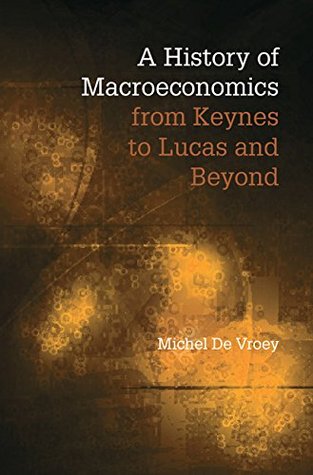 Exam review session is on the 4th of September at 1 p.m. in RuW 3.218.
Please register beforehand with Mrs. Biermann.

Bust of Franz Oppenheimer (centennial of the Goethe University)

On March 30 Franz Oppenheimer would have turned 150

The department of Economics and Business Administration would like to commemorate one of the most famous and distinguished representatives of the economic and social sciences at the Goethe University by erecting his bust in the foyer of the Law and Economics Building (RuW) on 31 March 2014.

Franz Oppenheimer had accepted tenure in sociology and theoretical political economy in 1919 and taught in Frankfurt until 1929. In the year of his retirement Fritz Kormis created the bust. The Jewish Museum Frankfurt is in possession of a gypsum copy of the original bust, which it kindly makes available to the department.

On the occasion of his birthday there will be a vernissage with lectures on Franz Oppenheimer and Fritz Kormis, followed by a temporary photo exhibition. The bust, displayed together with works of Oppenheimer's, will remain at the department for several years.

Just after his retirement Oppenheimer had vacated his Frankfurt flat and withdrew himself to the former manor in Lüdersdorf, where he stayed almost two years and which he helped transform into a rural housing cooperative. He wrote down his memories in the manor house and had them published under the title "Erlebtes, Erstrebtes, Erreichtes" ("Things experienced, saught, achieved"). In this book a photograph of the bust, which the Frankfurt-based sculptor Fritz J. (during his emigration: Fred) Kormis (1896-1986) had created in the late 1920s, was published for the first time. Evidently, Oppenheimer had wished to bequeath to ensuing ages a brazen testimony which was to endure beyond the passage of time. Of this bronze bust, now in possession of his grandchildren in Jerusalem, two gypsum casts were taken; they convey a peculiarly melancholy impression of Oppenheimer.

Photos from the opening ceremony:

Lectures on occasion of the vernissage of Franz Oppenheimer's bust, 30 March 2014 [German]:

During his time Oppenheimer was a famous political economist and sociologist who counted among his students Federal Minister of Economics and later Chancellor of the Federal Republic of Germany Dr. Ludwig Erhard as well as Minister of Economics of North Rhine-Westphalia Dr. Erik Nölting. He held tenure for the first professorship of sociology at the Goethe University from 1919 to 1929 and published over 50 books and 400 articles throughout his life. After his medical studies in Berlin Oppenheimer had worked temporarily as a physician and later turned to research in sociology and political economy. In his youth he associated with the Friedrichshagen poets' circle in Berlin and was a leading member of the international Zionist movement, at the side of which he stood as advisor during the founding of cooperative agricultural communities in Palestine. Oppenheimer was also involved in the founding of various agricultural producers' cooperatives of which he hoped - as a liberal socialist and vanguard of the social market economy - a solution for the social question of his time would ensue by means of an 'inner colonisation'. His thinking found its way into the agricultural programme of the German Social Democratic Party. During the National Socialist reign he emigrated first to Japan and China in late 1939 and then to the USA, where he died in destitute in Los Angeles in 1943.

This exhibition traces Oppenheimer's in every respect unusual life. Subject-specific peculiarities of the German-speaking economic and social sciences are considered just as much as the familial and historical context in which he moved. In this way and by means of a  scholar's outstanding biography it is possible to document different eras of more recent German history, from the time of Bismarck to the Second World War,

Speeches on occasion of the exhibition's opening on 14 April 2014 [German]:

Ever since March 1974 Professor Dr. Dres. h.c. Bertram Schefold has held a professorship at the Goethe University's Faculty of Economics and Business Administration, which has now been turned into a senior professorship. The Chair of Economic Thought will continue to offer a range of highly qualified courses and to improve its supervisory relations to students and degree candidates. We are glad to retain at the University of Frankfurt Prof. Schefold as professor emeritus, who will attend to the courses "Einführung in die Volkswirtschaftslehre" and "Theoriegeschichte" during the summer term 2012.

Requests for a Letter of Recommendation

Should you be interested in an individual Letter of Recommendation by Prof. Schefold, please address your request directly to our chair by means of the University's internet portal. Upon your registration, Prof. Schefold will be informed of your request automatically. We will then contact you.

The portal is available under https://www.uniforma.de/uni-frankfurt/economics.

A second Festschrift has been published by Routeledge in honor of Prof. Schefold. Its editor Volker Caspari presented Prof. Schefold with the international work on a ceremonial occasion. With this collection of essays titled "The Evolution of Economic Theory" and to which notable authors have contributed, Prof. Schefold is being honored for his academic life's work.

The Festschrift has been published as:
Caspari, Volker (ed.): The Evolution of Economic Theory. Essays in honour of Bertram Schefold. Abington, New York: Routledge 2011.

The contributions to the conference "Normen in der Volkswirtschaftslehre - Normung des volkswirtschaftlichen Curriculums", February 2010, have now been published as an anthology. The conference, organised by Bertram Schefold and Volker Caspari, dealt with contrary positions in the "new method dispute" in economics from the perspective of epistemology and the history of economic thought, and against the backdrop of the ignited debate among German economists surrounding the direction and the methods of their discipline.

Further information on this publication can be found here.


The top photo shows late chancellor Prof. Weinblatt, Prof. Schefold and the prize sponsor Prof. Thomas Guggenheim (from left to right) during the ceremonial distinction of the awardee in December 2010. The photo below shows the award.

The dissertation by Carlo d'Ippoliti, which has been supervised amongst others by Prof. Dr. Dres. h.c. Bertram Schefold, has received two awards for outstanding academic achievement. Having been honored with the "History of Economic Thought Young Scholar Award" of the American History of Economics Society, as well as with the "Storep Young Scholar Awards" of the Italian Association for the History of Political Economy, it is the first Italian-German double doctoral graduation. It was finalized in October 2009 with the involvement of the Goethe University's Faculty of Economics and Business Administration.

Along with Prof. Dr. Dres. h.c. Bertram Schefold, Professoressa Marcella Corsi (PhD) from the University "La Sapienza" in Rome has supervised Carlo d'Ippoliti's dissertation. Secondary referees were Prof. Annamaria Simonazzi of Rome and Prof. Dr. Rainer Klump of Frankfurt. A double doctoral graduation permits the candidates to acquire one doctoral degree in Frankfurt in addition to another at a foreign university by means of a single ordinary procedure.

Carlo d'Ippoliti's dissertation titled "Diversity and Economics" has been graded summa cum laude and deals with economic discrimination on grounds of one's gender. It is based on the one hand on an investigation of John Stuart Mill and Gustav Schmoller against the background of the history of economic thought. On the other hand Carlo d'Ippoliti analyzes with the help of empirical methods the situation of women in the Italian labor market. The approach linking the history of economic thought and empirical methods is combined with a critical examination of the framework in which the gender-discrimination problem is treated by the neoclassical mainstream in modern economics. An attempt is made to develop an heterodoxical approach to analyzing the special role of women in the labor market by means of a recourse to the works and insights of older branches of theory.

The dissertation has now been published in bookform:

Link to past announcements and events