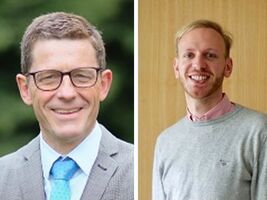 In a new article appearing in the Journal of Economic Psychology, Tim Bonowski and Gerhard Minnameier (Chair for Business Ethics and Business Education) address the question of how mutual trust can come about even in anonymous contexts. Their results show that mutual moral evaluations have an effect even when nothing is at stake except self-image. If the possibility for this kind of communication exists, it contributes to the stabilization of cooperation even under anonymity.

The fact that people are not only driven by material incentives but also take the interests of others into account in their decisions is not only everyday knowledge, but has become part of how modern economics understands human behavior. However, it is also well known that so-called social preferences are easily suppressed and apparently reveal a crude (self-interested) homo oeconomicus (although a substantial proportion of test subjects also cooperate under anonymity). Thus, experiments have shown that altruistic behavior decreases under anonymity, which raises doubts about altruism as a driving motive. Is this due to weakness of character or to the logic of the situation?

In favor of the former is the fact that, in many experiments (on the so-called "moral wiggle room" or on "moral hypocrisy"), the decision-makers are completely free and do not have to fear any negative consequences (or exploitation) of their own moral actions. The authors, however, take a contrary approach, arguing that moral norms are not primarily, or at least not only, self-enforcing, but are primarily solution concepts for underlying social dilemmas that involve communicative rewards and punishments in "moral currency" (just as formal institutions typically operate with monetary punishments and/or rewards). Anonymity makes moral currency exchanges impossible, and thus (tends to) displace morality.

To test their thesis, they conducted an experiment in which one person had to trust another person who had an opportunity to betray them. The authors compared whether trust and trustworthiness are greater in a real-money game, when actions are subsequently morally evaluated by a counterpart and the mutual evaluation is made explicit. Since players were assigned to new game partners in each new round and the interactions were completely anonymous, there was no reputation at stake for the participants and no possibility of establishing a personal relationship. From a moral point of view, the only thing that mattered was to show respect for others, to acknowledge this respect, or, conversely, to be able to express one's disrespect. For this purpose, the participants were allowed to give formalized feedback on the fairness and appropriateness of the other’s decision.

In groups where this opportunity for moral communication existed, subjects not only displayed greater trust, their trust was also met with greater trustworthiness. This shows that the possibility of exchange in moral currency (which otherwise does not form any strategic advantage) is used to help morality – in this case in the sense of the Golden Rule – to prevail. Conversely, it explains why morality easily disappears in anonymous contexts.

The authors point to the importance of trust for interactions of many kinds and the high cost of fraud and its prosecution. Given the intangible nature of moral communication, it could be a convenient means to support a culture of mutual trust on anonymous online platforms, for example.

The article can be found here